POINT PLEASANT, W Va. (AP) - The mysterious mothman was still at large near this normally quiet Ohio River community but the excitement he caused is dying down.

Nobody has identified definitely the wierd creature first reported by two couples near a wildlife preserve Nov. 15.

A West Virginia University professor suggested it was a rare species of the crane seldom seen east of the Mississippi River.

The excitement began two weeks ago when Mr. and Mrs. Roger Scarberry and Mr. and Mrs. Steve Mallett , all of Point Pleasant spotted a large white apparition flying at high speed following their car.

They told a deputy sheriff it looked like "a flying man with 10 foot wings" They said it was about seven feet tall with large red eyes.

Dr. Robert L Smith, associate professor of wildlife biology at WVU said the descriptions all fitted the sandhill crane the second largest American crane which stands almost as high as a man and has a wingspan of more than seven feet.

He said the "red eyes" could be the large circles of have red dish flesh around the crane's eyes. Smith said the bird apparently had wandered out of its normal migration route. 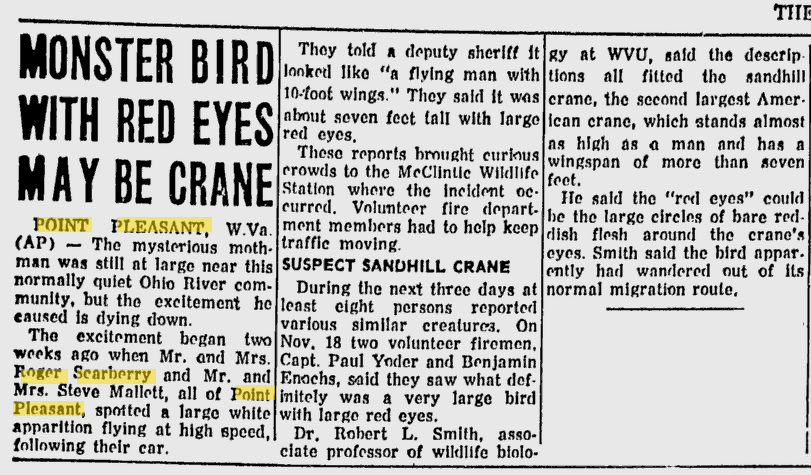