WV Bulletin Board of Strangeness

I started The Mothman Wiki on February 10th 2016 after having the idea come to me in a dream. I considered it a good idea, no one else had an entire wiki just devoted to The Mothman and I wanted to share everything I'd learned about the creature through my research of various books and documentaries on the subject.

When I made the wiki, the first sentence I wrote was "The Mothman is an important part of West Virginia Art and Folklore". I wrote this in a way to justify why I was creating the wiki, It was there to tell anyone who stumbled across the page that I wasn't someone who believed in The Mothman's existence but instead someone who appreciates the legend and the stories. When I chose to call myself a "Mothman Historian" it was for a similar reason, an attempt to bring legitimacy to a concept that is somewhat ridiculous but yet important to me and many people in West Virginia.

As I added articles to the wiki of important figures, events and sightings I realized that I was creating a database of what I'd read and that now I could cross-reference things. I'd read that there were over a hundred Mothman sightings in Point Pleasant between 1966 and 1967. So, I compiled all the sightings I could find that took place during that time but it only ended up being 27 sightings.

John Keel did say that his book only contained the most "responsible" sightings. He picked only what he considered to be the creme of the crop to take to print. They also say that there were many more people who didn't speak up about their Mothman sightings because of fear. Many people were said to believe that if they talked about it, the creature would come back. I consider the 27 sightings to only be the "Known sightings".

To keep track of the sightings I listed them by the witnesses name then the location and the date. John Keel employed a similar method in a sightings list that was printed in Loren Coleman's Mothman and other curious encounters book. I was able to list the sightings chronologically and compare the different witnesses descriptions of the creature. I found that most of the witness reports actually included names which very impressive and thorough compared to other folklore.

Eventually, as my database of sightings grew, I wanted to cross-reference the locations as well. I wanted to know what The Mothman's flight pattern would be. So I had the idea to create a Bulletin board for mapping out the strange sightings in West Virginia. I wanted something physical that I could add to and change as I learned more. I got a corkboard, a map of West Virginia, some colorful pins and string. I was going for that investigator look, like something you'd see in the office of an obsessed detective. The corkboard of pins and string is an iconic image, like something from memento or X-files.

With red pins, I mapped out the Mothman sightings. I tied red string around the first pin and looped them around each chronically to achieve the flight pattern. I mapped out The Men In Black Sightings in black pins and string. I placed a blue pin on Parkerburg to note Woodrow Derenberger's encounter with Indrid Cold, a green pin on Flatwoods to note the original Flatwoods Monster Sighting and yellow pins on The old WV State Penitentiary, Trans-Allegheny Lunatic Asylum and Lake Shawnee to note them as paranormal areas. I also placed a list of the sightings on the board along with printed out art of The Flatwoods Monster, Indrid Cold, Mothman and Men In Black.

As I tend to share my obsession with The Mothman, I took photos of the Bulletin board and posted them on Twitter. Surprisingly, Cryptozoologist Loren Coleman replied to my tweet and said "Great contribution. Is this available for viewing somewhere? Suggested adds: Bandit disappearance and reappearance locations".

I figured that he was just curious if it was open for the public to see. So, I replied back and said that it is just a bulletin board in my house but that I could probably make another one and give it to The Mothman Museum if they wanted me to. I also said that I could add the bandit locations. I knew that he disappeared in Salem and reappeared along the road to the mason county courthouse.

Loren replied back and said "In appreciation of all the work that went into this, I could see putting a copy in our cryptozoology museum too". Then he said "See also my Mothman book for all the 'other' forgotten Flatwoods-type monsters seen during that same time period around WV". I'm a big fan of Loren's work. His Mothman and other curious encounters book was one of the books that helped spark my initial intrest in The Mothman. I certainly didn't except him to offer something like this.

Having something that I worked on be in The Cryptozoology Museum would be an honor and it would also mean that there would be more Mothman related stuff at that museum which I find to be important because I want everyone to know about The Mothman legend.  I'm happy to contribute and spread awareness of the strange creatures seen in West Virginia. Cryptozoologists are the people who are trying to find out if there are real animals behind the Folklore. I think thats a valid function, if done right.

If we always go for the most likely explanation for things then how will we ever discover anything that is truly strange? Its nice that someone is taking the time to investigating the unlikely.

So I replied back and said "That'd be amazing! I'll work on adding more, making another and then maybe getting it to Maine somehow". I mapped out Bandit The Dog's disappearance and reappearance in white pins and string. Then, I began reading through Loren's book again, I found the other Flatwoods sightings and added them to the board with green pins and string.

Finally, I got another corkboard, another map and copied the pin placement, using the original board and The Wiki as a reference. I added the art, a list of sightings, a list of what the pin colors represent, and a piece of paper with the URL for The Mothman Wiki encase people want to know more about the creatures. The board was wrapped in bubble wrap, placed in a cardboard box and shipped to The Cryptozoology Museum. I'd heard that they're Mothman exhibit was small so hopefully this bulletin board will help Mothman take his rightful place among the Monsters of America and more people will learn about our favorite the omen of doom, The Mothman. 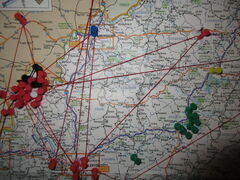 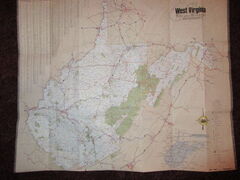 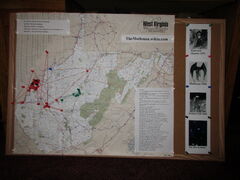 The Cryptozoology Museum Board 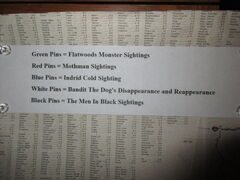 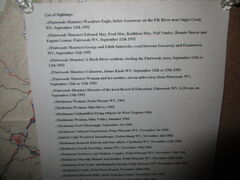 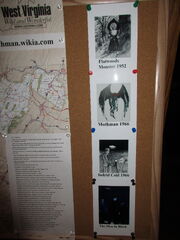 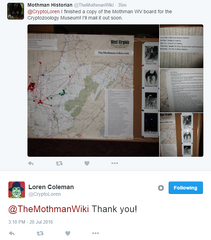 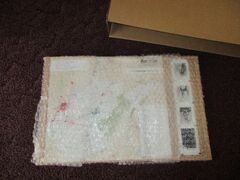 Shipping the board
Community content is available under CC-BY-SA unless otherwise noted.
Advertisement
Follow on IG Newsletter Join Fan Lab