A Trip To Flatwoods: Home of The Green Monster

A Trip To Flatwoods: Home of The Green Monster

On September 2nd 2016, my mother, my father and I visited Flatwoods, West Virginia. The place in which a group of people are said to have sighted the now legendary Flatwoods monster on September 12th 1952.

It happened when two brothers, Edward May (Age 13), Fred May (Age 12) and their friend Tommy Hyer (Age 10) witnessed a bright object cross the sky. The object appeared to come to rest on land belonging to local farmer G. Bailey Fisher. Upon witnessing the object, the boys went to the home of the May brothers and told their mother, Kathleen May.

From there, Mrs. May was accompanied by the three boys, West Virginia National Guardsman Eugene Lemon (Age 17), and local children including Neil Nunley (Age 14) and Ronnie Shaver (Age 10). They traveled to the Fisher farm in an effort to locate whatever it was that the boys had seen.

Lemon's dog ran ahead out of sight and suddenly began barking, and moments later ran back to the group with its tail between its legs. After traveling about 0.25 miles the group reached the top of a hill, where they reportedly saw a large pulsating "ball of fire" about 50 feet to their right.

They also detected a pungent mist that made their eyes and noses burn. Lemon then noticed two small lights over to the left of the object, underneath a nearby oak tree and directed his flashlight towards them, revealing the creature, which was reported to have emitted a shrill hissing noise before gliding towards them, changing direction and then heading off towards the red light. At this point the group fled in panic.

Upon returning home, Mrs. May contacted local Sheriff Robert Carr and Mr. A. Lee Stewert, co-owner of the Braxton Democrat, a local newspaper. Stewert conducted a number of interviews and returned to the site with Lemon later that night, where he reported that "there was a sickening, burnt, metallic odor still prevailing".

Sheriff Carr and his deputy Burnell Long searched the area separately, but reported finding no trace of the encounter other than the smell. Early the next morning, Stewert visited the site of the encounter for a second time and discovered two elongated tracks in the mud, as well as traces of a thick black liquid.

He immediately reported them as being possible signs of a saucer landing, based on the premise that the area had not been subjected to vehicle traffic for at least a year. It was later revealed that the tracks were likely to have been those of a 1942 Chevrolet pickup truck driven by local Max Lockard, who had gone to the site to look for the creature some hours prior to Stewert's discovery.

The director of the local Board of Education also made a report in which he claimed to have seen a flying saucer taking off at 6:30 a.m. on September 13, the morning after the creature was sighted.

Most of the witnesses agree that the creature was at least 7 feet tall. Kathleen May described it as green but others say it was a shiny metallic black that maybe reflected the green of the nearby bushes. It was dark and they only saw the creature for a few seconds by the view of a flashlight.

The original and most iconic drawing of the creature was commissioned by Lee Steward, and drawn by a New York sketch artist then superimposed on a photograph of a West Virginia site to show what the incident by local resident and UFO writer Gray Barker who was soon on the scene and wrote an account for FATE Magazine in January 1953 based on tape-recorded interviews.

The witnesses described the creature as having a red glowing, non-human round head and a large, circular pointed cowling appeared behind the head in the shape of the ace of spades. Most accounts record that the creature appeared to have "no visible arms" but Mrs. May reported long, stringy arms, protruding from the front of its body, with long, claw-like fingers.

Now its 64 years later and close to the anniversary of these sightings, we journeyed to Flatwoods and stopped as soon as we saw the old wooden sign reading "Welcome to Flatwoods Home of The Green Monster". We took a few pictures in front of it then kept driving, we were in search of a specific gift shop item, a Flatwoods Monster themed lantern cover that I'd seen online, as well as the Flatwoods Monster Chairs they have as roadside stops.

My family and I continued our drive until we reached the nearby Sunco gas station, one of the two places in which the lantern covers are sold.

The Braxton County Junior Chamber of Commerce originally produced the ceramic lantern in 1973 as a fund raiser, it is the oldest and longest produced novelty keepsake made to commemorate the events of September 12th, 1952.

The ceramic lantern is still in production today. John Gibson, a local resident of Braxton County, has these unique items hand made in Marietta, Ohio. Each piece is hand molded, fired, and painted. These lanterns are available locally at the Days Inn gift shop and Sunoco convenience store, both located within one mile of exit 67 of I-79.

As we were purchased the lantern, my father asked the person working at the counter if they knew where the Flatwoods Monster Chairs were, She and another guy working there gave us directions. The guy excitedly told of there also being a new painted billboard nearby. The novelty kind with the holes cut out for you to put your face into. We added that to our mental list of things to see while we were there and as we exited the shop, I heard the two workers still talking to each other, continuing the conversation about the creature.

That kind of thing makes me glad that I continue to convince my family to travel large distances to an obscure places where strange things are said to have taken place. All it takes is someone mentioning the creature to spark interest and keep the folklore alive. All it took for me was to see Mothman books on a library shelf to peak to my curiosity in West Virginia Folklore and that's what lead me to The Flatwoods Monster and this trip.

The chair that we saw was near a police station and another sign welcoming you to Flatwoods. We took tons of pictures sitting in the chair and doing poses around it. Beside the chair in between the police station was a billboard of information on the legend of The Flatwoods Monster, it included pictures of the witnesses, their sketches of the creature and basically all the information you need to know.

There were also QR codes that you could scan. Once scanned they showed The Monster themed Firefighter T-shirts and hooded sweat shirts that The Flatwoods Volunteer Fire Department sell online only. The Shirt sales are a direct fundraiser for new equipment the volunteer fire department needs to better serve the greater Flatwoods area.

Across the road we could see the painted novelty billboard, it was infront of a small restaurant called "The Spot". The restaurant even had printed out newspapers and Flatwoods Monster art.

We took several pictures in front of it. The billboard was clearly made to bring attention to that restaurant and if that was the goal then mission accomplished.

At this point, we wanted to see if we could find the farmland where the original sighting took place, we knew that we couldn't go to the exact location because someone owned it but we figured maybe we could see it from outside a fence or something.

We asked around, starting by asking a couple that parked by the chair but they weren't from the area and didn't know. We drove a few miles in each direction, saw a few different farmlands but couldn't determine if any of them were the place. Then we asked a guy at a nearby car wash but he was from Alabama and didn't know either. Was anyone in Flatwoods actually from Flatwoods?

Finally, my father went into an insurance place, there was an older guy in there who actually knew where the place was, he walked him out onto the porch and pointed out to the area where the sighting took place. The guy told of the sighting and even said "They definitely saw something". He said the person who currently owns the farmland is a doctor.

We drove up the small road and stopped just outside the gate. We of course didn't go in, all we could do was gaze on past the gate and think of that fateful night decades ago when the Mays saw something that changed the identity of the town forever and gave them their image, their mascot, the Braxton county, Flatwoods, green monster.

Folklore is a powerful thing, it can makes things are seemingly unimportant extremely relevant. Who would ever care about a specific moment on a random night in an obscure West Virginia community back in the 1950's? Well I would and so would many others who are entertained by the campfire story of the Flatwoods monster.

If you entertain an idea, the idea may entertain you. Someone seeing something strange, paranormal, unordinary, it immortalized the moment and everything around it.

Seeing something strange and interesting leads to regular people like Kathleen may, her sons and their friends still being remembered and talked about today after over 60 years of time. Ordinary people seeing unordinary things can make a simple piece of West Virginia farmland, an amazing sort of historical landmark for weirdness.

Its a shame that the farmland can't be open to the public in some way, maybe just on special occasions. If only the community of Flatwoods had a festival, a museum and a statue like the Mothman does in Point Pleasant.

Imagine if instead of that painted billboard being in front of a restaurant it was in front of The Flatwoods Monster Museum with a beautiful and accurate statue somewhere near it.

Just picture, The Flatwoods Monster Festival with guided tours of the sighting location. I for one would support that and I hope that something like that happens one day even If I have to be the one to do it.

My trip to Flatwoods was great, I got to see the iconic sign, buy the lantern which is pretty much the only piece of merchandise, see one of the chairs and a newly added painted billboard that I didn't even know about. The town was somehow obscurely famous and famously obscure. Even though their creature wasn't as prominent as the Mothman is in Point Pleasant, they did have a few good things for the tourists and they've definitely embraced their folklore. 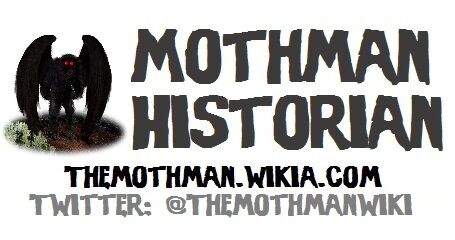