The Thunderbird is a legendary mythological large bird like creature in the history and culture of indigenous people of North America. The Native Americans consider it a supernatural bird of power and strength and is often carved as the top to a totem pole.

It is especially important, and frequently depicted, in the art, songs and oral histories of many Pacific Northwest Coast cultures, and is found in various forms among the peoples of the American Southwest, Great Lakes, and Great Plains. The legend is generally assumed to be based on real, though mythically exaggerated, species of birds, namely the bald eagle, which is very common on the Northwest Coast.

Native tribes all across North America, especially along the Pacific coast and in the Great Lakes area, have stories depicting enormous birds of prey. Some stories told that these birds were so large and powerful that when they flapped their wings, thunder was created. Lightning flashed out of their eyes, and water fell off their backs, creating rain. The tribes used Thunderbirds to explain some of the things that happened naturally, such as storms and other forms of weather.

Some tales tell of enormous eagles strong enough to carry whales back to their nests. Since pioneers began moving west across the North American plains, sightings of large birds have been reported. Similar stories appear from civilizations around the world.

The thunderbird's name is said to originate from the belief that the beating of its enormous wings causes thunder and stirs the wind. The Lakota name for the thunderbird is Wakį́nyąn, from wakhąn, meaning "sacred", and kįyą, meaning "winged". The Kwakwaka'wakw have many names for the Thunderbird, and the Nuu-chah-nulth (Nootka) called it Kw-Uhnx-Wa. The Ojibwa word for a thunderbird that is closely associated with thunder is animikii, while large thunderous birds are known as binesi.

Across many North American indigenous cultures, the Thunderbird carries many of the same characteristics. It is described as a large bird, capable of creating storms and thundering while it flies. Clouds are pulled together by its wing beats, the sound of thunder is made by its wings clapping, sheet lightning is the light flashing from its eyes when it blinks, and individual lightning bolts are made by glowing snakes that it carries in its talons. In masks, it is depicted as multi-colored, sometimes with two curling horns, and teeth within its beak.

Depending on cultural tradition, the Thunderbird is either a singular entity or a species. In both cases, it is intelligent, powerful, and wrathful. All agree one should go out of one's way to keep from getting Thunderbirds angry.

The legend of Passamaquoddies describes the quest of two Indians in search of the source of thunder high in the mountains. Other stories said that there was a thunderbird who battled an enormous killer whale. When the two beasts fought, they destroyed much of the land, knocking down trees and causing much destruction. Although dangerous and powerful beings, Thunderbirds were also seen as benevolent nature spirits, and they sometimes assisted the tribes in their search for food during periods of famine.

In the stories of the Nuu-chah-nulth people, a singular Thunderbird was said to reside on the top of a mountain, and was the servant of the Great Spirit. It was also told that the Thunderbird controlled rainfall.

It was taught by the Kwakwaka'wakw and Cowichan people that there were a Plural populations of Thunderbirds that could shape shift into human form by tilting back their beaks like a mask and by removing their feathers as if they were a feather-covered blanket. There are stories of Thunderbirds in human form marrying into human families; some families may trace their lineage to such an event. Families of thunderbirds who kept to themselves but wore human form were said to have lived along the northern tip of Vancouver Island. The story goes that other tribes soon forgot the nature of one of these Thunderbird families, and when one tribe tried to take them as slaves, the Thunderbirds put on their feather blankets and transformed to take vengeance upon their foolish captors.

Sioux stories tell that in 'old times' the Thunderbirds destroyed dangerous reptilian monsters called the Unktehila. The Menominee of Northern Wisconsin tell of a great mountain that floats in the western sky on which dwell the Thunderbirds. They control the rain and hail and delight in fighting and deeds of greatness. They are the enemies of the great horned snakes - the Misikinubik - and have prevented these from overrunning the earth and devouring mankind. They are messengers of the Great Sun himself.

The Anishinaabe, part of the Council of Three Fires, have many stories about Thunderbirds. During the Sun dance, ceremony a Thunderbird nest is put near the top of the tree of life. The dancers often face the nest while dancing, and their hands and arms reach up towards the nest at times. A Thunderbird pipe is used during the ceremony, and Thunderbird medicine is prepared as well. The area of Thunder Bay, Ontario, is related in some ways to the Anishinaabe stories of Thunderbirds. A famous story of the Thunderbird is 'Thunderbird and Whale'. Among the Winnebagos, it is said that a man who has a vision of a Thunderbird during a solitary fast will become a war chief.

Sightings of large bird like creatures have been reported for many years, at least since people began settling further west in the United States and Canada. One of the most famous reports is from 1890, where two Arizona cowboys claimed to have shot and killed a large bird. It was described as having no feathers, and it had the head similar to that of an alligator. The two men supposedly dragged the dead bird back to town after killing it. The report seems to suggest that this creature looked more like a pterodactyl or a dragon than any modern day bird.

On April 10, 1948, three individuals in Overland, Illinois, spotted what they originally thought to be a passing plane, but after seeing a large set of flapping wings, they realized this 'plane' was something very different. A few weeks later, in Alton, Illinois, a man and his son saw what they described as an enormous bird like creature with a body shaped like a naval torpedo. The creature was flying at at least five hundred feet and cast a shadow the same size as a small passenger airplane.

Similar sightings around the same time in St. Louis, Missouri, prompted residents to write concerned letters to then St. Louis mayor Aloys P. Kaufmann demanding that the city do something about these reportedly huge birds. The mayor instructed an administrative assistant to set a trap to catch one of the creatures, but when blue heron tracks were discovered on an island in the Meramec River, the mystery was considered solved.

There was a spike in Thunderbird sightings in the late twentieth century. On occasion, such reports were accompanied by large footprints or other purported evidence.

Among the most controversial reports is a July 25, 1977, account from Lawndale, Illinois. About 9 p.m. a group of three boys were at play in a residential backyard. Two large birds approached and chased the boys. Two escaped unharmed, but the third boy, ten-year-old Marlon Lowe, wasn't so lucky. One of the birds reportedly clamped his shoulder with its claws, then lifted Lowe about two feet off the ground, carrying him some distance. Lowe fought against the bird, which released him.

Viewed by some as a tall tale, the descriptions given by the witnesses of these birds match that of an Andean condor: a large black bird with a white ringed neck and a wingspan up to 10 ft However, an Andean condor's talons are not strong enough to lift heavy objects. Loren Coleman and his brother Jerry interviewed several witnesses after the reported event.

In 2002, a sighting of a large birdlike creature with a wingspan of around 14 ft was reported in Alaska. The Anchorage Daily News reported witnesses describing the creature like something out of the movie Jurassic Park. Scientists suggested the giant bird may have simply been a Steller's sea eagle, which have a wingspan of 6 8 feet. There had also been previous reports of similar creatures in the same area around that time. The paranormal reality series Destination Truth traveled to Manokotak in 2009 to search for the creature.

As recently as 2007, sightings have been claimed in the area around San Antonio, Texas.

Instead of accepting Thunderbirds as Mythology or Folk Lore, some have tried to theorized that the ancient Thunderbird myth to be based on sightings of a real animal with a mistaken assessment of its apparent size. The fossil record does show that giant birds called teratorns with wingspans between 12 and 18 ft were likely contemporary with early man but today these creature is generally regarded as a myth.

Some people also posit that the Thunderbird was associated with storms because they followed the drafts to stay in flight, not unlike the way a modern eagle rides mountain up currents. John A. Keel, Writer of The Mothman Prophecies, claimed to have mapped several Thunderbird sightings and found that they corresponded chronologically and geographically with storms moving across the United States.

Angelo P. Capparella, an ornithologist at Illinois State University, argues that the existence of such undiscovered large birds is highly unlikely, especially in North America. There is not enough food, Capparella says, in many areas where abnormally large birds are reported. Perhaps more important, according to Capparella, is the lack of sightings by 'the legions of competent birdwatchers ... scanning the skies of the U.S. and Canada' who sometimes make 'surprising observations' with cameras at the ready. If there were there breeding populations of large unknown birds, Capparella contends, they could not remain unknown very long. 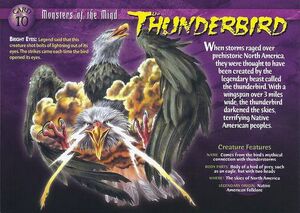 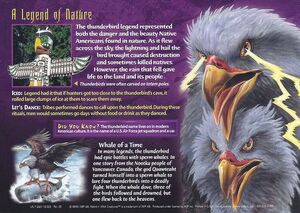 Add a photo to this gallery
Retrieved from "https://themothman.fandom.com/wiki/Thunderbird?oldid=6232"
Community content is available under CC-BY-SA unless otherwise noted.