The former West Virginia Ordnance Works is a location that locals dubbed "The TNT Area". It is now an overgrown wildlife preserve located in Mason county about seven miles north of Point Pleasant.

Its also known as the McClintic Wildlife Management Area. The 3,655 acres of wild life management is occupied by 600 acres of farmland, 180 acres of wetland, encompassing 31 ponds, 1,100 acres of brush-land and 1,775 acres of mixed hardwood forest.

Part of the area was used as a place to manufacture and store ammunition in World War II. Almost a hundred large concrete domes, often called Igloos or bunkers, were built into the ground to house explosives. These were designed to not be noticeable from the air.

Many of the Mothman sightings took place in or around The TNT Area leading people to think of it as Mothman's home or hideout. The abandoned North Power Plant building was the location of several Mothman reports including the initial Scarberry and Mallette sighting which was the first to make local news in November of 1966.

The teens speculated that the creature, which locals then referred to as simply "The bird", lived in the North Power Plant. The building eventually came to be known as "The Bird House". Throughout 1966 and 1967 many West Virginia locals and sightseers flocked to the area in search of the monster. Volunteer police officers and firemen estimated that each car in the area had at least one gun.

It was later revealed that the TNT Area was horribly polluted and many of the ingredients that went into making the ammunition were dumped and left to seep into the local pounds.

Pond 13 is known for being effected the worst. A women fishing in that pond discovered a red water seep and pointed it out to a wildlife biologist named Tom Dotson. He sent it to the lab and discovered that it did contain levels of TNT.

In the 1970's, scientists declared the area an environmental disaster and it became one of the top EPA Superfund clean up sites.

The old North Power Plant building that once stood on the property was demolished in the early 1990's. It was thought to be unsafe because of the frequent trespassers and the state of the building's decay.

The Division of Natural Resources leased out several dozen of the concrete TNT bunkers in the McClintic Wildlife Management Area to businesses looking for unique storage.

On May 17th 2010, an underground storage bunker filled with ammunition exploded in The TNT Area. Empty barrels and metal storage boxes were thrown everywhere, some landing as far as 100 feet away in a nearby swamp. The steel doors were thrown off and the ceiling, which is made of 6-inch concrete, lifted up and then caved in.

The bunker contained 15,000 to 20,000 pounds of military issued gunpowder and was leased by Richard King of High Performance Ammunitions.

The West Virginia State Police and the Federal authorities temporarily shut down the area later that year. They preformed a full sweep of the property looking for illegal or potentially dangerous explosives before reopening the area. The Mothman Festival still gives tours of The TNT Area each year.

"Mothman lives" written on a tank 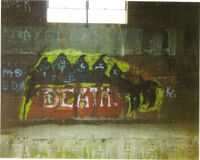 Creepy Graffiti in the building

Mothman Graffiti in the building