The Main Street in Point Pleasant, West Virginia led straight onto an eyebar-chain style suspension bridge named "The Silver Bridge", based on its aluminum paint, that went across the Ohio river to Gallipolis, Ohio. The bridge was built in 1928. Locals would cross it on a daily basis, sometimes several times a day. At 5:05 Pm on December 15th 1967, exactly 13 months after the first Mothman sightings, the bridge was full of cars, many of them Christmas shoppers, when suddenly it began to shake. They heard The low moaning of metal and then a loud screech.

Mary Hyre was a newspaper reporters who wrote articles about the Mothman and was a close friend of John Keel, Writer of the Mothman Prophecies, they teamed up to interview witnesses of The Mothman. On November 19th 1967, she told Keel: "I had a terrible nightmare. There were a lot of people drowning in the river and Christmas packages were floating everywhere in the water. Its like something awful is going to happen." When Keel returned to Point Pleasant around Thanksgiving 1967, people in the area were having dreams and nightmares about a coming disaster. Virginia Thomas had them about people dying the water of the nearby Ohio River.

In an interview, Bridge Collapse Survivor, Charlene Wood said "When I got to the traffic light, here in point pleasant, I got the red light. When it changed I started going up onto the bridge and just about that time, the bridge started shaking". She heard a loud noise and thought that a boat had hit into the bridge underneath. She reversed her vehicle as the bridge began folding inward on itself, with her tires stopped on the ledge where it broke off.

The Bridge collapsed into the water below. Forty Six people died, nine were injured and two victims were never found. making it the worst bridge accident in American history at the time. For days rescue workers pulled smashed cars and bodies from the river. Debris littered the water, the tragedy had happened on the coldest day of the year.

The department of transportation conducted a detailed investigation of the collapse and found the cause to be a small 0.1 inch (2.5 mm) deep defect on the 13th steel pin eye-bar on the bridge that was improperly manufactured.

This historical event of The Silver Bridge Collapse impacted the Mothman urban legend. With a town busy grieving and mourning their loved ones, they no longer gave their attention to the creature sightings. The Mothman seemed to vanish, there were no more sightings at that time.

With all the sightings happening from around November 15th 1966, to December 15th 1967 and then suddenly stopping, it seemed as if it was all building towards the event.

A couple of sightings of Mothman were said to have occurred near the bridge before the incident. Rumors eventually spread that the bridge collapse was connected to the Mothman in some way and that he could have been a warning or a dark premonition. This was the beginning of The Mothman being associated as an "Omen of Doom". Mothman eventually began being reportedly seen all over the world before tragedies struck and the creature went from small town folklore to global monster icon.

Close up of the actual broken eye bar 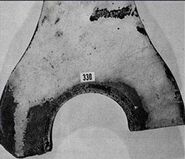