There is a story that in April 1890, two cowboys in Arizona killed a giant birdlike creature with an enormous wingspan. It was said to have had smooth skin, featherless wings like a bat and a face that resembled an alligator. This description has some similarity to that of a prehistoric pterodactyl; an animal whose existence was known at the time. They are supposed to have dragged the carcass back to town, where it was pinned with wings outstretched across the entire length of a barn.

A picture of this event may have been published in the local newspaper, the Tombstone Epitaph. There is also an account of this story with the events taking place in the state of Texas.

In the May 1963 issue of Saga magazine, writer Jack Pearl recounted this story of the Tombstone Thunderbird , along with some large bird sightings of the early 1960's. Not only did he tell the story though, he went one step further and claimed that the Tombstone Epitaph had, in 1886, "published a photograph of a huge bird nailed to a wall. The newspaper said that it had been shot by two prospectors and hauled into town by wagon. Lined up in front of the bird were six grown men with their arms outstretched, fingertip to fingertip. The creature measured about 36 feet from wingtip to wingtip."

While this is a different variation of the story (and size of the creature), it seems to be referring to the same incident. Was this nothing more than a mythic legend of the west, or was there something to the story after all?

In the September 1963 issue of FATE magazine , a correspondent to the magazine named H.M Cranmer would state that not only was the story true, but the photo was published and had appeared in newspapers all over America.

Cranmer would not be the only one who remembered the photo. Eminent researcher Ivan T. Sanderson also remembered seeing the photo and in fact, even claimed to have once had a photostat of it that he loaned to two associates, who lost it. The editors of Fate even came to believe that they may have published the photo in an earlier issue of the magazine but a search through back issues failed to reveal it.

The original Epitaph story about the capture of a large unusual winged creature was indeed printed on April 26, 1890 but It mentions no photograph. The Epitaph story was revived in a 1969 issue of Old West, further confusing the issue as to whether the photo was real or not.

Interestingly, this reprint caused a reader to remember another strange incident. He wrote to the magazine in the summer of 1970 and gave a firsthand account of a separate flying monster incident that also occurred near Tombstone. The writer had met two cowboys who told about seeing a similar creature around 1890, although they had shot at and chased the creature until their horses refused to go any further. This giant bird was not killed, brought to town or photographed. In fact, except for the fact that it was not shot down, their account sounds much closer to Bell's original report.

The Epitaph however stated that the photo did not exist, or if it did, it had not been in their newspaper. Responding to numerous inquiries, employees of the paper started a thorough search of back issues and files. They could find no such photo and even an extended search of other Arizona and California newspapers of the period produced no results. A number of articles that appeared in Pursuit, the journal for the Society for the Investigation of the Unexplained prompted a memory from W. Ritchie Benedict, who recalled seeing Ivan T. Sanderson himself display a copy of the photo on a Canadian television show "The Pierre Benton Show". Unfortunately though, no copies of the show have ever been found.

During the 1990's, the search for the "Thunderbird Photo" reached a point of obsession for those interested in the subject. A discussion of the matter stretched over several issues of Mark Chorvinsky's Strange magazine and readers who believed they had seen the photo cited sources that ranged from old books, to Western photograph collections, men's magazines, National Geographic and beyond. People combed through literally hundreds of issues of dusty copies of True and Saga to find nothing more than the previously mentioned article by Jack Pearl.

In the late 90's, Mothman Prophecies author John Keel insisted that "I know I saw it! And not only that - I compared notes with a lot of other people who saw it." Keel believes that he saw it in one of the men's magazines like Saga or True that were so popular in the 1960's. Most of these magazines dealt with amazing subject matter like Bigfoot, ghosts and more. Keel also remembers the photo in the same way that most do - with men wearing cowboy clothing and the bird looking like a pterodactyl or some prehistoric, winged creature. John Keel even said specifically that the creature did not look like a vulture with a hooked beak, as Sanderson's explanation had it. Keel said it had a long and pointed beak like a Pteranodon. This is quoted in such books as Jerome Clark's Unexplained.

In the year 2000, The television program Freakylinks staged a similar photo, giving new life to the "Thunderbird Photograph" legend. Their photo featured a dead pterodactyl laying in a field with its wings spread and seven men dressed in civil war attire holding rifles. One man in front has his foot on top of the creature. The Fox TV/Universal Studio prop now is located at the International Cryptozoology Museum. 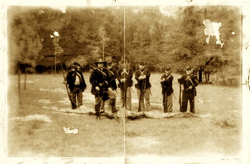 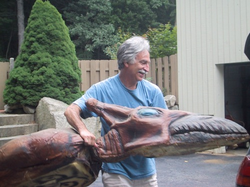 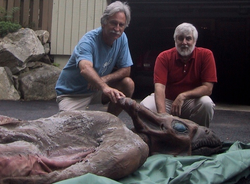 Patrick Huyghe and Loren Coleman with the prop.
Add a photo to this gallery

In August 12, 2009, a user named SaintAlbans999 posted a wordpress article called "My Fortean Life" in which told his story of witnessing the image. He claimed to have seen the original image in a magazine in the year of 1967. He said that a magazine "ran an article on old stories from the American West, one of which featured prominently a photograph of several men pointing to what appeared to be a large, black pterodactyl, nailed to their hunting cabin or a shed. I remember the picture distinctly and recall the article, but not the magazine title or the author". He reportedly recalled the image so well that he drew a picture of it which has appeared in “Strange Magazine” and other books on unknown mysteries several times. The image features a pterodactyl pinned to a small wooden shed with four men standing by it holding rifles. Some say it is as close as they remember to the true original. Others say they saw something very different.

One photo that was found is known to be an amalgamation or "montage" that uses the death photo of outlaw John Sontag (1893) as a base and then adds the pterodactyl corpse atop the image. As to where or when this montage could have been made, it could have been made anytime after 1893. Probably sometime in the early 20th century and possibly as an April Fool's gag or possibly a souvenir postcard coming out of Tombstone Arizona or anywhere else in the Southwest. Possibly not the only variation of the idea in circulation, either. This fake could possibly be one

Aside from the many drawings, other photos of giant flying reptile corpses with humans that have nothing to do with the Freaky links or the Montage image began popping up and circling around the internet. They are probably just modern recreations yet many of their origins are unknown. 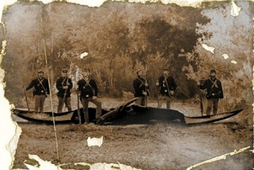 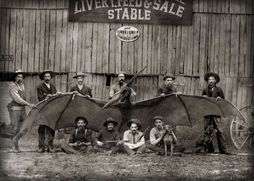 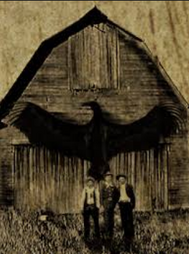 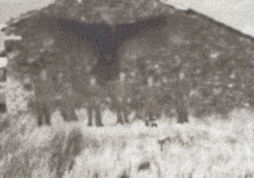 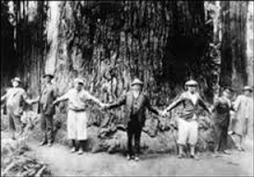 UNKNOWN ORIGIN
Add a photo to this gallery

Jerome Clark and author Mark Hall speculate that the description of the basic image in question (men standing alongside a winged creature nailed to a barn) is evocative enough to implant a sort of false memory, leading some people to vaguely "remember" seeing the photo at some distant, imprecise time. It creates such a vivid image in the mind that many people who have a knowledge and an interest in curious and eclectic things begin to think the photo is familiar. It literally creates a "shared memory" of something that does not exist.

There continues to a veritable storm of controversy around whether the original photograph ever appeared, who published it, and where it went if it did exist. Some say it is a complete case of mistaken identity or even “false memory”. Still others swear up and down they have seen this photo at one time or another. The cultural behavior surrounding the issue is telling. We ask ourselves if what we recall as reality is even true, or is it some sort of dream? Or perhaps the whole controversy represents the need for some of us to get notoriety or to at least feel like we are apart of something important. Whatever the case, why was there a storm of controversy around a simple photograph? It most likely would have turned out to be a silly “photo-shopped” little bit of fluff anyway, a nicely done up hoax. Yet the idea that there could be a picture of what might have been a once living prehistoric bird which has now gone missing, tantalizes and tempts many to fits of passion either pro or con.

Retrieved from "https://themothman.fandom.com/wiki/The_Missing_Thunderbird_Photo?oldid=2651"
Community content is available under CC-BY-SA unless otherwise noted.