"I wish we had never seen it, I wish someone else had seen it."  - Linda Scarberry, Mothman Witness, 1966

One of the most famous Mothman stories is the Scarberry and Mallettte sighting which is said to have occurred on November 15th 1966 in Point Pleasant, West Virginia.

The story was the first to make news in the area and generate public attention, stories of prior encounters in the area were only discovered afterwards.

It was this sighting that was first got writer of The Mothman Prophecies, John Keel interested in the creature.

On November 15th 1966, two young couples were joyriding around in a Black 1957 Chevy to a remote hangout spot north of Point Pleasant known as The TNT Area. One of the couples was Linda Scarberry and Roger Scarberry, the other was Steve Mallette and Mary Mallette.

When they got there next to the abandoned North Power Plant they suddenly saw two large red eyes which reflected the light from the car's headlights. Steve noticed it first and pointed it out to the group. That is when they are said to have noticed that the glowing red eyes belonged to a strange creature. They claimed to have seen a grey man-like figure with wings go around the corner at the old power plant. They said that the creature didn't run, but wobbled like it couldn't keep its balance. Linda described the creature as having circular fiery red eyes and a body like a man but with wings. They said the creature was about 6 or 7 feet tall with wings folded against its back. Half Man, Half Monster. She said "You could see muscles in its legs".

The couples couldn't believe what they had seen. They quickly drove off onto Route 62. Linda yelled for Roger to hurry. The couples then saw the creature on a hill by a large billboard as they went around a curve. It spread its wings and went straight up into the air.

They were all terrified and kept yelling for the driver to go faster. The Mothman began gliding back and forth over the back end of their car. "We didn't know what it was. I don't think we've ever been so scared" said Linda.

As they went along a straight stretch of road, they were going over 100 miles per hour but the creature was still able to follow them. They saw it in the back window and saw the shadow go across the car as it flew, they couldn't get away from it. They could also hear the wings hitting the top of the car as they drove. It's even said to have left scratch marks on Roger's '57 Chevy.

"It squeaked like a big mouse" said Mary Mallette. They were only able to get away from the Mothman when they reached the edge of Point Pleasant. The creature disappeared, veering off into a field, as they went into town.

The couples continued going into town. They stopped at the local Dairyland as they tried to figure out what to do next. Linda suggested they go to the police but Steve and Roger thought they'd just laugh at them and wanted to go back to make sure the thing was still there first. The group ended up being too afraid to do that, so they turned around.

As they were turning around, they saw a large dead dog laying along the road which was gone when they went by again later. According to the couples, the winged creature jumped out as they passed where the dead dog was, went over the top of the car, and went through the field on the other side.

They drove back into town and parked at Tiny's Diner and decided to contact the police. The teens told their story to Deputy Millard Halstead. They told police that they saw a large winged creature whose eyes "glowed red" when the car headlights picked it up. They described it as a "flying man with ten foot wings" following their car.

Halstead didn't believe them at first but knew that weren't troublemakers and saw that they were genuinely terrified, so he actually went out to investigate their story. The couples drove back out to the TNT area with the deputy. Millard shined a spot light around the area including the tree lines.

Deputy Halstead is said to have heard strange static disturbances coming from his radio that he couldn't explain but he found no clear sign of the creature itself. The witnesses were sitting in their car and said that they saw shadows circling nearby and a cloud of dust kick up from an adjacent coal yard. The Mallettes were too scared to go back to their homes, they stayed at the Scarberry's trailer, turned all the lights on and stayed awake all night from fear.

The following day, Sheriff George Johnson held a press conference to discuss the sightings, the local press began printing the story and named the creature "Mothman" based on the comic book character, Batman, who had just gotten a television series at the time. Steve Mallette told the local newspaper "We understand people are laughing at us. But we wouldn't make up all this to make us look like fools".

That same day the couples went back to The TNT Area during daylight and found odd looking tracks resembling "Two horseshoes put together" but smooth. Steve saw something fly up inside a boiler when a door was kicked open. No one stayed around long enough to see what it was.

After this original sighting, more and more people began reporting seeing similar things such as Marcella Bennett's sighting which happened a day later. Hundreds of cars full of eager people swarmed out to the TNT area at night in hopes of seeing the Mothman. A shadow was cast of the valley of Point Pleasant and the thus began the legacy of West Virginia's Mothman.

The story was immediately picked up by the newspapers and spread quickly, large crowds had already gathered in The TNT Area by the next night. Within the week, the papers had already named the creature and were picking up on similar sightings as well as speculating different explanations for what was going on. The media storm continued throughout 1966 and 1967. The story was printed locally, nationally and internationally. It went over the Associated Press wire and was even featured in the Pacific Stars and Stripes newspaper which went out to the American troops in Vietnam.

In 1970, author John Keel released a book called Strange Creatures From Time And Space which contained a chapter about Mothman and included this sighting. Then in 1975, he released his book The Mothman Prophecies.

The story has since been detailed in several books, articles, newsprint, TV shows and documentaries. Information can be found at The Mothman Museum and a retelling of this story was even immortalized on Bob Roach's Mothman Statue in Point Pleasant.

Linda Scarberry, born Linda McDaniel, (June 10th 1947 - March 6th 2011) was the child of Park and Mabel McDaniel. She was 19 years old during the initial Mothman sighting on November 15th 1966. She was married to Roger Scarberry who was 18 at the time. They were friends with Steve and Mary Mallette. The teens attended Point Pleasant High School.

The Scarberry and Mallettes gave police reports of their Mothman encounter in 1966 and were interviewed by the local press in the morning after their sighting. The couples later had many conversations and correspondence with New York author John Keel who took several trips to Point Pleasant WV during his investigation of the story.

The Scarberry couple said that they experienced strange occurrences and Poltergeist activity in their homes throughout 1966 and 67. Linda claimed to have seen the creature many times including once on the roof. She said "It seems like it doesn’t want to hurt you. It just wants to communicate with you".

On July 11th, 2001, Linda was interviewed for the book Mothman: The Facts Behind The Legend by Jeff Wamsley and Donnie Sergent Jr.

On September 12th 2001, when David Grabias produced the documentary Search For The Mothman, the crew interviewed Linda Scarberry on location at The TNT Area for ten minutes but then had to stop as Linda became too overwhelmed by fear to go any further. Her now ex-husband Roger refused to be interviewed, as did the Mallettes.

Linda Scarberry appeared on the TV show MonsterQuest on February 10th 2010. She later died at the age of 63 on March 6th 2011. The story of the Scarberry and Mallettes continues to be told and repeated in various forms of media. 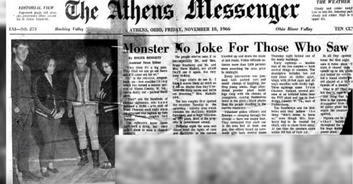 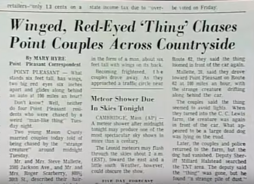 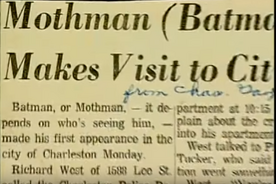 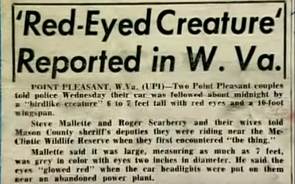 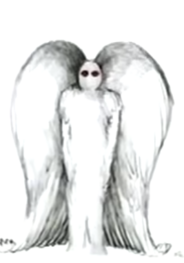 Forensic Sketch based on Linda's sighting by David E. Weaver on MonsterQuest. 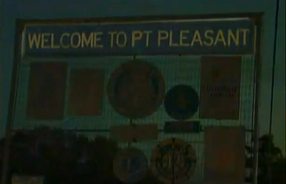 Point Pleasant
Add a photo to this gallery
Retrieved from "https://themothman.fandom.com/wiki/Scarberry_and_Mallette%27s_Mothman_Sighting?oldid=6119"
Community content is available under CC-BY-SA unless otherwise noted.