On November 20th 2016, A caller reported to WSAZ Channel 3 News in West Virginia that he had seen the Mothman while driving along Route 2 in Point Pleasant. He is said to have pulled off the road and snapped some quick pictures of what he saw jumping from tree to tree.

The local news stations reported on the story including the snapshots that the caller is said to have taken at the scene. The man declined an on-camera interview, but was adamant that the pictures had not been doctored. He said he recently moved to Point Pleasant for work and initially didn't even know about the legend.

When WCHS Channel 8 News reported on the story they asked owner of the Mothman Museum and local Mothman expert, Jeff Wamsley, what he thought about the authenticity of these photos. Jeff Wamsley said that with modern technology, it's almost impossible to know for sure if the pictures are real.

Point Pleasant locals such as Carolin Harris, owner of The Mothman Diner, believe the pictures could be real because there have been so many other sighting over the years.

Reporter Katy Andersen of WSAZ tweeted these images saying: "MOTHMAN?! Caller says he saw Mothman while driving on Rt. 2 in Point Pleasant tonight. What do you think?" 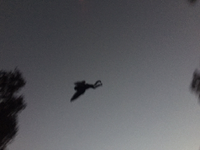 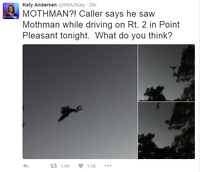 Add a photo to this gallery
Retrieved from "https://themothman.fandom.com/wiki/November_20th_2016_Mothman_Sighting?oldid=6116"
Community content is available under CC-BY-SA unless otherwise noted.