In 2016, Mothman art was painted on a pillar beneath an overpass in Charleston, West Virginia. The artist was Kelly Bryant, a local to the area.

The art featured Mothman in grey and black colors, with circular red eyes, flying in front of the moon above The Silver Bridge and several winter trees. This depiction included long fingered hands held out in front and massive contoured wings. The sky was painted a light purple with small white stars and the word "Mothman" was in bold red scratchy lettering along the side. The artist signed the bottom of the piece "Kelly Bryant 2016". 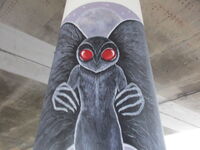 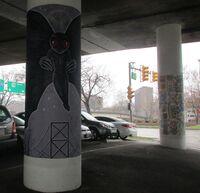 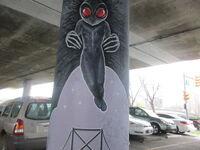 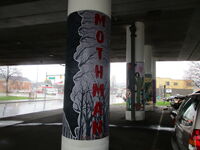 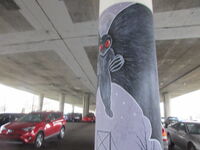 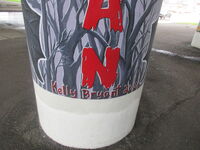 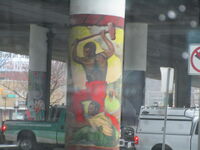 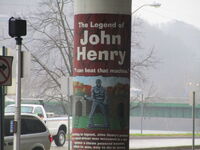 Add a photo to this gallery

Other support pillars were also painted with art of different things such as the legend of John Henry which is also considered to be Folklore from West Virginia.

Kelly Bryant of Charleston has worked in several different mediums such as pastels, acrylic and glass. Shes done commissions, sold her art at local shows, been featured in the September 2013 issue of Guitar World magazine and participated in the Charleston Artwalk.

Retrieved from "https://themothman.fandom.com/wiki/Mothman_Painted_Pillar?oldid=3502"
Community content is available under CC-BY-SA unless otherwise noted.