Mary Hyre (1915 – February 15th 1970) was a newspaper reporter for "The Athens Messenger". She was also the manager of their office on 6th Street in downtown Point Pleasant, West Virginia.

During the Mothman sightings in Point Pleasant, Mary Hyre would often report on the odd occurrences in her newspaper column called "Where the Waters Mingle". As a result, author John Keel and Mary Hyre became associated together out of mutual interest in the subject.

She helped with his investigations and kept him updated through correspondence. She claimed to have seen the weird lights in the sky on several occasions and even claimed to have been visited by mysterious Men In Black.

Mary was often relentless in her endeavor to report the strange phenomenon going on in Point Pleasant, some believed this lead to the Men In Black paying regular scheduled visits to her office in attempts of putting a stop to her releasing newspaper reports.

Her most notorious and well known stories were one in which she regretted ever having to write. These were the numerous reports that she released on the collapse of the Point Pleasant Silver Bridge which killed 46 people on a late December evening on 1967.

Mary Hyre died on February 15th 1970. She lived to be 54 years of age and had worked for The Athens Messenger for over 27 years. She was dedicated to her family, her career and her hometown of Point Pleasant.

In 1975, John Keel dedicated his book, The Mothman Prophecies, “To Mary Hyre and the people of West Virginia." 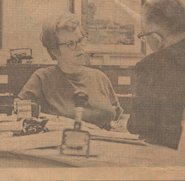 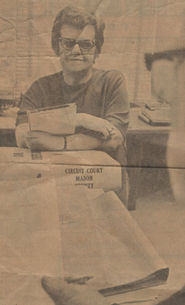 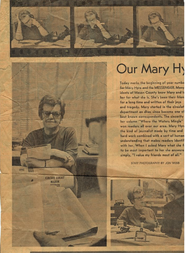 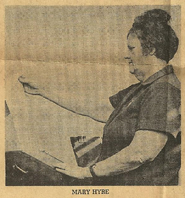 Add a photo to this gallery
Retrieved from "https://themothman.fandom.com/wiki/Mary_Hyre?oldid=5520"
Community content is available under CC-BY-SA unless otherwise noted.