Keel was born in Hornell, New York, the son of a small-time bandleader. His parents separated and he was raised by his grandparents in the nearby town of Perry.

As a child he read insatiably. He remembered himself as a “reading machine”, especially anything about magic (illusion), humor, science, travel, and aviation. He had his first story published in a magicians' magazine at age 12.

By the time he was 14, he was determined to be a writer: he wrote a column, “Scraping the Keel,” for the Perry Herald; published his own science fiction fanzine, The Lunarite; and was routinely sending out submissions to magazines. He left school at the age of 16 after taking all the science courses.

In 1947 at the age of 17, he hitch-hiked to Manhattan, or more specifically to Greenwich Village. He became associate editor of the quarterly magazine Poets of America (1947-1949), and editor of the weekly newspaper Limelight (1949-1951). At this time, he was also writing for comic books, contributing poetry to various magazines, turning out scripts for the early TV station WABD and authoring many pulp articles. He also wrote scripts for radio shows, including Grand Central Station and First Nighter.

When he was 18, he had a strange illumination experience in his furnished room off Times Square. He remembered the room “filled with an indescribable light, a pinkish glow”; and his mind “flooded with a torrent of information.”

In 1951, he was drafted. He served in the US Army during the Korean War on the staff of the American Forces Network at Frankfurt, Germany. He claimed that while in the Army he was trained in psychological warfare as a propaganda writer.

After leaving the military he worked as a foreign radio correspondent in Paris, Berlin, Rome and Egypt. Some of his programming ideas, a remote broadcast from the Great Pyramid and another from Frankenstein’s Castle, earned him a great deal of publicity. 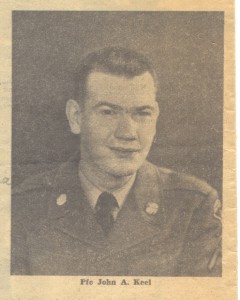 In 1954, he was restless and determined to see more of the world. He spent the next year wandering throughout the Middle East in Egypt and India investigating the Indian rope trick and the legendary yeti.

He supported himself by sending back stories and articles to his agent, who then placed them in men’s adventure magazines. In Singapore, he was deported as an “adventurer,” and moved to Barcelona, where he turned his experiences into the book, Jadoo.

He published Jadoo in 1957 and moved back to New York City, and promoted it by performing with cobras in the window of the Midtown Aquarium at Times Square, and with many TV and radio appearances. Then he edited the magazine Echo. Funk & Wagnall’s also hired him as a science and geography editor (1959-1960).

In 1966, he was commissioned to write an article on Unidentified Flying Objects. He was determined to write the definitive article on the subject. Keel became hooked on the subject of UFO and began conducting his own field research. He traveled around the country, interviewing witnesses, and writing dozens of articles.

The phenomenon, he learned, took its toll on its investigators: he entered a shadowy world where black cars vanished on country roads, meaningless messages turned up in hotel rooms, and his phone and mail suffered strange interceptions.

Influenced by writers such as Charles Fort, he began contributing articles to Flying Saucer Review and took up investigating UFOs and other strange sightings as a full-time pursuit. He concluded that a disproportionate number of sightings occurred on Wednesdays.

After hearing about the Scarberry and Mallette Mothman Sighting, he made repeated visits to Point Pleasant, West Virginia, then the site of particularly active monster and UFO sightings. (Visited on: Wednesday, Dec 7th 1966 - Dec 8th 1966, Late March 1967 - April 6th 1967, November 1967 and more)

Reports of paranormal activity was overtaking the small town of Point Pleasant throughout 1966-1967 resulting in Keel adopting that area as his own research microcosm. As it turned out, Keel would not be disappointed with his selection of Point Pleasant. The result was one of his most popular books, The Mothman Prophecies.

Upon arriving in Point Pleasant, Keel soon found strange coincidences and phenomena would follow him wherever he traveled. He would find the same thing to be happening with many of the eyewitnesses of the creature that was later dubbed "The Mothman".

Keel stayed in contact with some of the eyewitnesses for many years and would frequently travel back to Point Pleasant from his home in NYC to conduct more investigations, Keel himself never had a run in with the infamous Mothman, but he often would see strange lights over the town.

Keel then became a technical adviser to the Library of Congress (1968-69), and special consultant to the office of Scientific Research and Bureau of Radiology (1968-71), before becoming a consultant to the Department of Health, Education and Welfare. He also fulfilled a boyhood dream by earning his pilot’s license.

Along the way, he also put out a lively newsletter, Anomaly, which spanned 11 issues from 1969 to 1974. He also wrote a regular column for Saga and published several books. In 1970, he released his study on UFOs entitled Operation Trojan Horse. That same year he also put out an encyclopedia of monsters entitled Strange Creatures From Time And Space which included a chapter on West Virginia's Mothman. Keel then released Our Haunted Planet in 1971.

In 1975, he published his book The Mothman Prophecies. The book was Keel's account of his experiences in Point Pleasant and his investigation into sightings of the huge, winged creature called the Mothman. The book combined Keel's account of receiving strange phone calls with reports of mutilated pets and culminates with the December 15th 1967 collapse of the Silver Bridge in West Virginia across the Ohio River.

Keel's Follow-up book, The Eighth Tower, was also released in 1975. The book was comprised of reworked material that was left out of The Mothman Prophecies and delves further into Keel's ideas and possible explanations.

In the 1980s, he attempted a number of plays and novels, none of which made it to the page or the stage. He devoted his time to various mail order projects, and revived the dormant New York Fortean Society. And he contributed a regular column to Fate magazine, “Beyond the Known".

He also released another book, Disneyland of The Gods, in 1988 and did a revised version of his book Strange Creatures From Time And Space, entitled The Complete Guide to Mysterious Beings in 1994.

Keel lived for many years in the Upper West Side of New York City. In his later years, he was slowed down considerably by diabetes and its complications. He had some lean times, particularly when cataracts, and the resultant eye surgery, made writing difficult.

His luck turned when The Mothman Prophecies was made into a major motion picture movie in 2002; he was particularly delighted at being portrayed by Richard Gere, whom he referred to as a “John Keel look-alike". The publicity sparked several new editions of the book, including numerous foreign editions. He bought a car, which he dubbed the Mothmobile, and often disappeared on solo road trips. He attended the 2003 Mothman Festival in a white suit and was there for the unveiling of the Mothman Statue.

In 2006, he released The Best of John Keel which was a collection of Keel's FATE Magazine articles.

Keel suffered a heart attack sometime before October 13th 2006. He admitted himself to New York City’s Lenox Hill Hospital on Friday the 13th of October, and underwent successful heart surgery on October 16th 2006. Keel then was moved from the hospital to a rehabilitation center on October 26th 2006.

With age, his health declined, and he spent several years in and out of hospitals and nursing homes; his friends pitched in to keep him going. He died on July 3rd 2009, at the age of 79, at Mt. Sinai Hospital in Manhattan. Many friends visited him in his various hospitals and homes. His papers were saved by his friends and family.

Prolific and imaginative, Keel is considered a significant influence to many. His impact should not be underestimated, especially in terms of his analysis of patterns. The popular cultural influence of Keel has been enormous. It will take future academic studies to fully realize his reach among the subculture that respects and are denizens of his ongoing intellectual playground.

John Keel is often credited for popularized the term Men In Black and introduced the acronym MIB. He had many interesting ideas attempting to explain the nature of the odd things that people often report to see. He viewed these things as aspects of a larger phenomenon.

Windows and The Superspectrum

John Keel strongly disagreed with the "Extraterrestrial hypothesis" for Unidentified Flying Objects. In other words, he did not think that UFOs were from other planets and he was completely against this notion. He instead posited his own hypothetical explanations for where they might come from. He thought of UFOs as manifestations from an extradimensional force or state of energy beyond our current understanding.

Keel analyzed what he called "window areas" or "zones of fear" which he viewed as areas in which strange otherworldly entities and creatures could enter our world. He favored this explanation for Mothman. He thought that there were certain places of high strangeness where these windows let in visitors.

Hes quoted as saying: "From time to time the playful inhabitants of the other world climb through the curtain in the areas we call 'windows', and they stalk us to drink our blood and create all kinds of mischievous beliefs and misconceptions in our feeble little terrestrial minds"

And: "This planet is haunted by us; the other occupants just evade boredom by filling our skies and seas with monsters".

He wrote about these ideas in his 1975 book The Eighth Tower : "This is a hypothetical spectrum of energies that are known to exist but that cannot be accurately measured with present-day instruments".

Keel continues : “This superspectrum is the source of all paranormal manifestations ... it is extradimensional, meaning that it exists outside our own space-time continuum yet influences every thing within our reality.” John Keel considered what others thought of as different phenomenon to all be one in the same or at least connected.

Retrieved from "https://themothman.fandom.com/wiki/John_Keel?oldid=5514"
Community content is available under CC-BY-SA unless otherwise noted.