John and Tim Frick (The Frick Brothers) are avid paranormal investigators, artists and UFO eyewitnesses from Cumberland, Maryland. They've been greatly inspired by the work of John Keel.

They've helped organize the Mothman Festival and are often Guest Speakers there. They've dressed as the Men In Black during festivals, been featured in the Eyes of The Mothman Documentary, created Mothman Replicas and had various strange experiences involving the Mothman Phenomenon.

On page 170 of his book The Mothman Prophecies, John Keel wrote: "A family in the south of England still spend their weekends driving around woods looking a mysterious lake they encountered some fifteen years ago. Out in the middle they saw a huge rock with a sword driven into it. Later they went back to do some research but there was no trace of such a lake. No one had heard of it and it isn't on the maps."

In 1991, Tim Frick read the Mothman Prophecies. He distinctly remembers reading about the sword stuck in the bolder out in the middle of the lake. However, he also recalls Keel mentioning the source of this material being a book called "The Green Stone".

Upon reading this, Tim scribbled down some notes on a piece of paper. The note read "Excalibur 170 The Green Stone". A few months after he wrote the note, it went missing and remained lost until the day before thanksgiving of 2015. He found it among some of his old papers. The note had been lost for 24 years. When Tim went to look at the passage on page 170 of the Mothman Prophecies there was no mention of the book called The Green Stone.

After searching on the internet, he found The Green Stone was a book by Graham Phillips & Martin Keatman. Interestingly enough Excalibur is actually mentioned in the book and it talks about a lake in England that has been around since medieval times called "Knights Pool". The weirdest part is that The Green Stone was first published in 1983, eight years after John Keel's 1975 Mothman Prophecies book. This means that it would be impossible for John Keel to have mentioned the book.

John and Tim Frick often dressed up as the legendary Men In Black during the Mothman Festival. They've also appeared in a Mothman documentary as the MIB. On November 3rd 2006, The Frick Brothers went to a convention in North eastern Ohio, that night they stopped by the house of a friend of theirs named Shirley and talked to her for about half an hour.

The next day, November 4th, while they were on interstate 80 headed east to Toledo, they saw a white van come up behind them and pass them. The van had slightly shaded windows and through the windows they could see three or four men in black three-piece-suits. The licenses plate number was "1111L" and above it read "Unregistered Vehicle". The Frick Brothers even took pictures of the vehicle. The van stayed within sight of them for at least a half hour, either in front of them or behind them and they passed each other several times.

About a week after leaving Toledo and driving back home, Shirley sent John Frick an email asking if they had been back in the area since the week prior. John told her that they hadn't. She explained to them that a few nights ago, while she was walking her dog, a vehicle pulled up into the church parking lot across the street from her house and two tall men got out.

She watched them, at first she thought they were The Frick Brothers but after she noticed that they were walking funny, she wasn't really sure. Shirley then saw that they were watching her as well and it gave her the creeps so she went back inside her house and watched them from behind closed blinds.

Shortly afterwards, another vehicle pulled into the parking lot and a man got out and talked to the two men who were already there. Then the three people got into their vehicles and drove away.

The next day, Shirley was looking at a baby monitor that she was planning to sell. There's something about baby monitors that allow them to pick up calls made by portable phones. So When she tested it to see if it worked she overheard an interesting phone call between two of her neighbors.

One of the neighbors said that her son has seen some suspicious activity in the church parking lot and pulled in to ask the two guys what they were doing. The two mysterious men told Shirley's neighbor's son that their names were Tim and John and they were paranormal investigators.

Between June 2004 and October of 2006, The Frick Brothers had visited the George B. Stevenson Dam in Pennsylvania a total of eight times. They would walk down the gravel road near the dam. The road appeared to come to a dead end stop at the base of a mountain. Tim Frick specifically remembers commenting about how strange it was and how they need to do something with the road.

Later, on June 30th 2007 when the brothers returned to the dam, they discovered that the road now wrapped around the mountain down to a lake front. Tim was pleased to see that they had finally done something with the road. While chatting with one of the park rangers, he asked when this new road was put in. He fully expected the person to tell him that it was put in over the winter or over the last couple months but he was stunned when the park ranger told him that it was put in when the dam was first build back in the 1950's.

The night before the 6th Annual Mothman Festival, September 14th 2007 at around 11:25pm, John and Tim went into The TNT Area. They arrived at an igloo with their four friends. The first thing they noticed was a car parked at the guardrail, they also saw flashlights down the road and amused that those people were the owners of the car.

John and Tim then headed up to another igloo and hung out there for a while. Their friends were creeped out by the igloo and waited outside. They then went back to their vehicles only to discover that the car parked at the guardrail was now gone, but none of them had seen the owners pass by them, not even their friends standing on the path. The only other way for the people to get to their car would have been to walk over a mile and go around the back which seemed very unlikely for them to have been able to do in that time.

The strangest part was that the next night, The Frick Brothers discovered that their friend Rosemary Ellen Guiley had ran into John Frick in the Lowe Hotel at 11:40pm on Friday night when he was still physically in the second igloo. John had no recollection of being in the hotel at that time or ever having the conversation that Rosemary recalled.

On September 20th 2010, the day after the 9th Annual Mothman Festival, The Frick Brothers went to go and check out some old rusted water tanks within in the TNT area. They parked there vehicle near the location and walked down the narrow path. They claim to have seen three giant water tanks.

They walked around the tanks examining them and took photos of them standing next to them for scale. They looked up between the first two tanks and couldn't see the sky because of the foliage. Then, they specifically remember looking up between the second and third tank and being able to see the sky.

That night, they went home and looked up images of the area on Google earth. They found the tanks but there were only two of them. At first they thought the program was wrong but when they went back to the area to check, the third tank was gone. 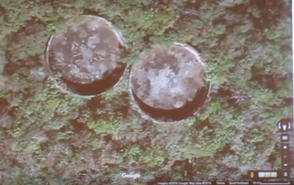 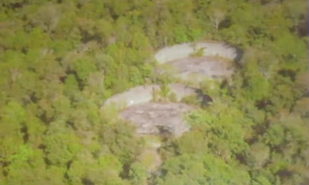 The Frick Brothers created a 10ft Mothman replica that hangs from the ceiling of the Mothman Museum in Point Pleasant, West Virginia. Older photos reveal that the replica was originally black before later being painted light gray. It features cloth wings, clawed hands and feet, bicycle reflectors for eyes and a skull-ish face. The flying Mothman replica is also zips over head during the TNT Hayrides which are held during the Mothman Festival at the Farm Museum. 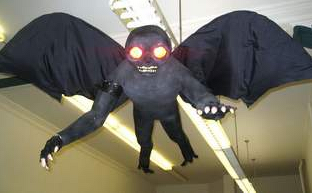 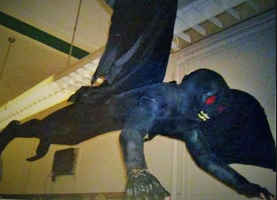 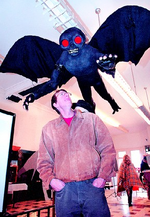 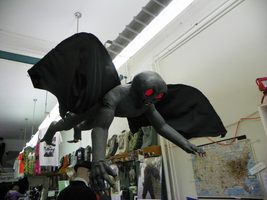 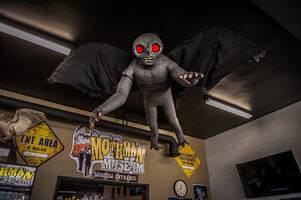