The man who first coined the term Cryptozoology

Ivan Terence Sanderson (January 30th 1911 – February 19th 1973) was a biologist and writer born in Edinburgh, Scotland, who became a naturalized citizen of the United States. Sanderson is remembered for his nature writing as well as his interest in undiscovered animals (Cryptozoology) and paranormal subjects.

Born in Scotland, Sanderson traveled widely in his youth. His father, who manufactured whisky professionally, was killed by a rhinoceros while assisting a documentary film crew in Kenya in 1925. 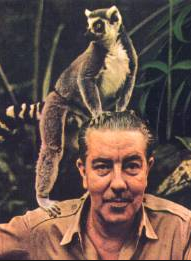 As a teenager, Sanderson attended Eton College, and at 17 years old, began a yearlong trip around the world, focusing mostly on Asia. Sanderson earned a B.A. in zoology, with honours, from Cambridge University faculty of Biology, where in the same faculty he later earned M.A. degrees in botany and ethnology.

He became famous claiming to have seen a "Kongamato" in the 1930's, after being attacked by a creature he described as "the Granddaddy of all bats". A Kongamato or "breaker of boats" is a reported giant bat or pterosaur-like creature said to have been seen by the people of and explorers in the Mwinilunga district's Jiundu swamps of Western Zambia, Angola and Congo.

Sanderson conducted a number of expeditions as a teenager and young man into tropical areas in the 1920s and 1930s, gaining fame for his animal collecting as well as his popular writings on nature and travel.

During World War II, Sanderson worked for British Naval Intelligence, in charge of counter-espionage against the Germans in the Caribbean, then for British Security Coordination, finally finishing out the war as a press agent in New York City.

Afterwards, Sanderson made New York his home and became a naturalized U.S. citizen.

Sanderson was an early follower of Charles Fort. He became known for his writings on the subject of anomalous phenomena, especially his work about mysterious or unknown animals. This topic would later be known as cryptozoology, a word that Sanderson coined in the early 1940s. Sanderson focused his attention on the search for lake monsters, sea serpents, Mokèlé-mbèmbé, giant penguins, Yeti, and Sasquatch. In 1948 Sanderson began appearing on American radio and television, speaking as a naturalist and displaying animals. In 1951 he appeared with Patty Painter on the world's first regularly scheduled color TV series, The World is Yours.

In 1952, Ivan Sanderson was one of the first investigators on the scene to report on the Flatwoods Monster seen in Braxton County, West Virginia.

Sanderson provided the introduction for 12 episodes of the 1953 television wildlife series Osa Johnson's The Big Game Hunt a.k.a. The Big Game Hunt featuring the films of Martin and Osa Johnson. Throughout 1950s, Sanderson was a frequent guest on John Nebel's paranormal-themed radio program. He was a frequent guest on The Garry Moore Show, where he brought live specimens on talk shows.

Sanderson's television appearances with animals led to what he termed his "animal business." Initially Sanderson borrowed or rented animals from zoos in the New York metropolitan area for his TV appearances. In 1950 at a meeting of the National Speleological Society, he met 20-year-old Edgar O. ("Eddie") Schoenenberger, who by 1952 was his assistant and ultimately partner in his animal business. Schoenenberger suggested that, instead of "renting" animals, they should purchase and house them, and gain some additional income by displaying them in a zoo.

Sanderson purchased in November 1952 the "Frederick Trench place" a 250-year-old farmhouse, outbuildings and 25 acres (100,000 m2) of land a short ways from the ultimate location of the zoo between the communities of Columbia and Hainesburg. He refurbished and expanded moving 200 of his rarest animals to a barn nearby so he could keep close watch on them. Then, in the spring of 1954, he established "Ivan Sanderson’s Jungle Zoo" (and Laboratory), a permanent, summer, roadside attraction near Manunka Chunk, White Township, Warren County, New Jersey.

Sanderson also developed and deployed winter traveling exhibits of rare and unusual animals for sports shows and department stores. A fire on the night of Tuesday or early morning hours of Wednesday, February 2nd 1955 destroyed his collection of 45 rare animals kept in a barn at his New Jersey home. Ivan Sanderson's Jungle Zoo was flooded out by the Delaware River during the floods caused by Hurricane Diane on August 19, 1955. Sanderson often traveled from his New Jersey home to his New York apartment to visit friends and to appear on radio and television programs.

In the 1960s Sanderson lived in Knowlton Township in northwestern New Jersey, before moving to Manhattan. In his book Mysterious America, author Loren Coleman writes that Ivan Sanderson discovered the 1909 "Jersey Devil" incident to be an elaborate real estate hoax.

In 1961, Ivan T. Sanderson released his iconic work on the legend of the Himalayan Yeti titled "Abominable Snowmen: Legend Come To Life".

Sanderson officially met John Keel, writer of The Mothman Prophecies, in 1962 after he wrote him a letter. They had previously seen each other at flying saucer conventions but only officially first met face to face in '62. They respected each others work and corresponded frequently through the mail.

Sanderson founded the Ivan T. Sanderson Foundation in August 1965 on his New Jersey property, which became the Society for the Investigation of the Unexplained (SITU) in 1967. SITU was a non-profit organization that investigated strange phenomena ignored by mainstream science.

Ivan released a book called "Uninvited Visitors: A Biologist Looks At UFOs" in 1967 based on his research of Unidentified Flying Objects. He also wrote a variety of essays titled simply "Things" that same year.

During John Keel's investigation in Point Pleasant, Ivan Sanderson served as Keel's consultant on the naturalist and biological component of such reports. Keel was often on the phone with him at this time. Sanderson was more involved with the Mothman situation than is often remembered.

Sanderson wrote further essays in 1969 titled "More Things" and released a book called "Invisible Residents: The Reality of Underwater UFOs" in 1970. He then wrote essays titled "Investigating the Unexplained" in 1972.

Sanderson was married twice. His wife Alma accompanied him in the travels discussed in his books Caribbean Treasure and Living Treasure. In 1973 he died of brain cancer in New Jersey, which had become his adopted home.

Not only had Ivan wrote books on the study of UFOs but he coined the term, Cryptozoology for the study of unknown or hidden animals. Mothman is often considered to be a part of both of those fields of research.

Illustrated with Sanderson's drawings, they are accounts of his scientific expeditions. Sanderson collected animals for museums and scientific institutions, and included detailed studies of their behaviors and environments.

During the 1950s and 1960s, Sanderson was widely published in such journals of popular adventure as True, Sports Afield, and Argosy, as well as in the 1940s in general-interest publications such as the Saturday Evening Post.

Retrieved from "https://themothman.fandom.com/wiki/Ivan_T._Sanderson?oldid=5762"
Community content is available under CC-BY-SA unless otherwise noted.