The Dover Demon is a small sandpaper-skinned, pale orange humanoid large-eyed creature seen for one brief week in April 1977, in Dover, Massachusetts when multiple witnesses came forward with their sightings. The impact and weirdness of the Dover Demon lives on in its appearance on TV programs, comic books, T-shirts, toys and books.

The creature is sometimes depicted as a sickly grey alien looking creature but the witnesses described it as a peach color. There are conflicting reports of the eye color, witnesses reported orange eyes, green eyes or no glowing eyes at all.

The name "Dover Demon" was coined by Fortean researcher Loren Coleman. The creature has an exhibit in his Cryptozoology Museum and on August 1st 2013, Stackpole Books published Monsters of Massachusetts, a book by Loren Coleman featuring the Dover Demon.

The first sighting took place on April 21st 1977, in the town of Dover, Massachusetts. Three 17-year-olds driving were driving along a lonely road in Farm Street. One of them, Bill Bartlett, noticed a creature near a broken stone wall. The thing turned and looked into the headlights with large, shiny eyes "glowing brightly like orange marbles."

It had a large oval head that was easily as large as its body atop a spindly neck. The body was quite lanky, and it had large feet and hands "with tendril-like fingers". The creature was hairless and appeared to have rough, pale skin similar to the texture of sandpaper. It was only in view for a few seconds, and while no one else in the car saw the small creature, they all agreed that Bill was genuinely distraught.

When he returned home that night he drew a picture of the monster, later to be dubbed the Dover Demon, when his father noticed that he was rather upset. Over the course of the night two more sightings occurred before the thing ambled back into the mystery from whence it came.

A 15-year-old named John Baxter sighted the Dover Demon while walking home from his girlfriend's house through the heavily wooded area on Miller Hill Road. At first, he mistaking it for a very short friend of his (accounts state that the creature was less than 4 feet tall). Baxter got a good look at it for a few minutes. It had long toes and fingers that it wrapped around a tree trunk and rocks as it stood, perhaps observing Baxter in return. Despite seeing it for a longer period of time, it was late at night, and his best sighting was of the creature momentarily silhouetted against a field. He didn't report an eye glow.

John Baxter with his sketch 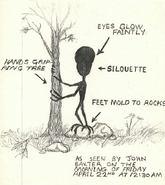 John Baxter's Actual Sketch
Add a photo to this gallery

The next night, April 22nd 1977, a young man named Will Taintor was driving a friend of his home along on Springdale Avenue when she spotted the creature. His friend, 15-year-old Abby Brabham, described it as being down on all fours (Or sitting upright? Conflicting reports), hairless, and having glowing green eyes. The witness stuck to her guns even after it became known Bartlett had described the eyes as orange.

The teenagers all drew sketches of the alleged creature. Bartlett wrote on his sketch, "I, Bill Bartlett, swear on a stack of Bibles that I saw this creature". According to the Boston Globe, "the locations of the sightings, plotted on a map, lay in a straight line over 2 miles"

Police told the Associated Press that creatures reported by the teenagers "were probably nothing more than a school vacation hoax". All of the witnesses to this creature have been reported as credible witnesses and none have ever altered their stories.

However, Bill Bartlett had a teacher who warned investigators that "If I was to pick someone to pull something like this, it would be Bartlett". That being said, The investigators were on the scene fairly rapidly, so it's unlikely that the memories degraded or changed between the incident and the investigation.

Some theorized that the creature was, in fact, a fox that had contracted a disease of some sort that caused severe swelling and bloating.

Others have theorized that the creature was in fact a baby moose. Martin Kottmeyer went to great lengths explaining why he thought this in his article "Demon Moose" and Loren Coleman went to equally great lengths explaining why this wasn't true. The Dover Demon was reported to be standing on two legs by Baxter; however, it's not unreasonable to theorize that if it were indeed a moose, it was feeding from the upper parts of the tree, and that it was just leaning on it with its two front legs.

Coleman rejected the theory that the creature was a newborn moose, citing official records of moose birthing dates and the absence of moose in Massachusetts at the time.

In the 1978 book that Loren Coleman wrote with Jerome Clark, Creatures of the Outer Edge, he first documented his 1977 investigations of the Dover Demon. During his initial fieldwork, he coined the file name, “Dover Demon,” which found a life of its own. Importantly, he got to the chance to examine all the eyewitness details before the media did.

Searching the archives almost 40 years later, retired Boston Museum of Science Planetarium assistant director Walt Webb forwarded a scan of an original article from 1977. The news item contained mention of a part of the Dover Demon episode that he have never re-told until then; the weird Men in Black incident that happened in the wake of the Dover Demon sightings.

These encounters were captured in two cooperating newspapers at the time: The Daily Transcript, August 30, 1977 and The Needham Chronicle, August 31, 1977. The article was “That ‘Demon’ in Dover was Real to UFO author in Needham” by Joan Wright.

The specific section under focus noted:

"It could be coincidence, but Coleman implies it’s more. He reported that two months to the day of the first sighting, two ‘men in black’ appeared at the Dover House, (similar in philosophy to the Walker House) looking for Coleman.

A woman at the school gave the men Coleman’s address but they never contacted him. However, the men told the woman not to tell anyone about the Dover Demon. Wearing black leather jackets and white motorcycle helmets, the men, according to the woman, stood perfectly erect with their arms by their sides and spoke in a monotone. They identified themselves as investigators from the National Geographic.

Coleman spoke to a friend in Ohio who, in what appears to be another coincidence, experienced the same thing. The man said that three years ago, after a sighting in Ohio, two men fitting the same description, talking the same way, and also identifying themselves as being from National Geographic, demanded of some witnesses that they not say a word about what they saw."

Footnote: “Dover House” was a group home in Dover, for emotionally disturbed boys, serving as a residential branch of the treatment center, the Walker School for Boys, in nearby Needham, Massachusetts. In 1977-1978, Loren was Walker School’s overnight program director and a social work masters graduate therapy intern there.

In terms of this Dover Demon Men in Black case, perhaps these individuals were nothing more than X-Files fans who went overboard, a bit, in trying to track down Loren Coleman. Still, the “National Geographic” would be a weird cover story.

Retrieved from "https://themothman.fandom.com/wiki/Dover_Demon?oldid=6216"
Community content is available under CC-BY-SA unless otherwise noted.