On July 28th 1980, author John Keel appeared on television for an interview with TV host David Letterman. The following is an transcription of that appearance.

David Letterman: Our next guest is a Fortean and we'll find out exactly what that is from him. He is also the editor in chief of Pursuit Magazine. Welcome please, John Keel.

David Letterman: So your a Fortean aye?

Letterman: What is a Fortean? Shall I spell that? F-O-R-T-E-A-N. What is that?

Keel: Back in the early part of the century there was a man named Charles Fort who spent his entire life in the New York Public Library, going through the old scientific journals and old newspapers, and he published a series of books about strange things that turned up in these old journals. Like when it would rain frogs in France or red snow in Switzerland. He kept track of all these things and did a series of books and we started calling these events Fortean events and today we still keep track of them.

Letterman: I see, now the two examples you cited there, I've heard of the raining frogs and its always a matter of- It's either one an old wive's tale- Remember the time it rained wive's tales? *crowd laughter* -or it's disputed in some way. They could just say "Well there were frogs in the trees when it rained they jumped out".

Keel: Well, we have compiled a list of several thousand mysterious things that have fallen from the sky. Documented things. They include things like stone pillars, canon balls, all kinds of strange things. In China it once rained raw meat. There's no explanation.

Letterman: When in china did it rain raw meat?

Keel: Well quite awhile ago, it was in the 19th century.

Letterman: Now how is it that all the unexplained things took place in the 19th century or before?

Letterman: Give me a recent unexplained thing -

Keel: Every January and February here in the northeast we have what we call Skyquakes. They get into the papers sometimes. Now recently they've been blaming the Concorde for this but this has been going on- we've been keeping track of this since about 1840.

Letterman: What is a skyquake?

Keel: It's an explosion in the sky. We have no explanation for it. We've got a lot of pseudo-explanations but-

Letterman: How do we know when we hear one or see one?

Keel: Because its like when a jet plane passes over at Mach 2. It's like breaking the sound barrier. Its an explosion that shatters- sometimes shatters windows and so on. And this has been going on- In Connecticut for example the Indians have legends about this going way back. So this has been going on for a very long time but every time it happens the scientists come up with a new far-fetched explanation for it.

Letterman: What is the most common or daily unexplained occurrence? I mean something that we would all say "Yeah that thing, we can't explain it."

Keel: Well we don't necessarily have daily occurrences but in recent years the UFO phenomenon has been very common around the world right now its going on Argentina and while a lot of people think they have an explanation for it, actually we're just beginning to find out whats really going on with the UFO phenomenon.

Letterman: UFOs are pretty much- I would guess if we asked the audience- I would probably find half of them said yeah they have reason to believe there's something going on out there, I think.

Keel: At least 10 percent of them have probably seen one themselves.

Letterman: Has anybody here ever seen one of these things? People applaud if seen one-

*Some of the crowd applauds*

Letterman: And how many of you think there may be something visiting us?

*Most of the crowd applauds*

Letterman: What other things fall into the category of unexplained phenomenon?

Keel: Well we have mysterious animals that turn up all over the world.

Keel: Here in the united states every year or two we have kangaroos jumping around Illinois, Connecticut, various parts of the united states. We know there are no kangaroos here. Police go out and chase them, shoot at them, they disappear, we never-

Letterman: So what is your theory where do you think they're coming from?

Keel: The same place that the dinosaurs are coming from, because we have dinosaurs turning up every couple years. About ten years in Italy the Italian army turned out to chase the dinosaur in the mountains of northern Italy. And, they leave dinosaur footprints and that's the end of them. They can't find where they've gone. We've got better monsters than that. We've got our sea serpents. Which, we have several lakes in the United States that have sea serpents not just loch ness.

Letterman: Where is a serpent in this country?

Letterman: Really? What is up there?

Letterman: Well, lets you and me drive up there. *Crowd laughter*

Keel: Alright, we'll go up there next week.

Letterman: Take the Italian army with us, we'll get those boys and um-

Letterman: Have we ever photographed a sea serpent?

Letterman: Now this uh- what do we have here?

Keel: This is a plaster cast of a big foot print. Now, you've all heard of the Abominable snowman in the Himalayas, we have in the United states a creature that's variously called "Sasquatch" or "big foot" and hes found not just in Washington and Oregon but hes found all over the United States. Especially in the Mississippi valley and even in New Jersey. We have quite a lot of reports in New Jersey and that's where this footprint comes from.

Letterman: This says "To you from Uncle Lou and Bob". That's what it says here.

Keel: They're two Forteans in New Jersey. This is an authentic footprint.

Letterman: Did you make the cast?

Keel: No, they did. They're well known Forteans. Bob is an airlines pilot and Uncle Lou is a dental surgeon in New Jersey. They're very active.

Letterman: How big would this guy be based on this foot?

Keel: He would be about 800 pounds, probably eight or nine feet tall. And that's what the witnesses are always describing. Incredible as it is. And in of course the Himalayas, the Abominable snowman uh-

Letterman: Now, that I think- that we believe in or at least I do. To me it seems like sure its possible that something left over that survived the Ice Age or didn't survive or something. You know, that there may be a missing link and so on and so forth. Some of this other stuff like, the red snow- what was the red snow?

Keel: Well the usual scientific explanation for that is that the sands of the Sahara are somehow drawn into clouds and drop in Switzerland-

Letterman: Now I can believe that-

Letterman: But what if the sand went up and was somehow oxidized or- and turned red? Isn't that possible?

Keel: Well, they've made various chemical analysis of this kind of snow. We've had black snow too.

Letterman: There's yellow snow. I'm familiar with that. I think we we're all waiting for that one weren't we? *Crowd Laughter*

Keel: We just don't know what really causes this phenomenon.

Letterman: Is there one in particular that keeps you awake at night? That just gnaws at you.

Keel: The animal mutilations that have been going on around the country. Especially out west in recent years but they're also going on in Brazil and France and Australasia and Switzerland, Sweden.

Letterman: And these are not pranks or sick jokes?

Keel: No, thousands of animals have been slaughtered now by some mysterious group. They drain all the blood from the animals and they also perform expert operations on the animals removing certain organs. And veterinarians who examine these animals say they can't duplicate the operations.

Letterman: That's amazing. I would also like to know why cab drivers in this city don't speak English but we'll never figure that one out. *Crowd Laughter* Uh- we have to pause. Mr. John Keel, a Fortean ladies and gentlemen. 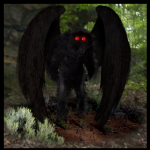