Robert Roach, more commonly known as Bob, is said to have created the iconic design of the statue by using an image of a bodybuilder from a magazine as a reference point.

He interviewed people who claimed to have seen the Mothman and took bits and pieces of their descriptions of the creature; attempting to combine them into a single form.

The statue also appears to be similar to Mothman art by Frank Frazetta as seen on the cover of John Keel's book, The Mothman Prophecies.

There is a plaque on the base of the statue with a short summary of the Scarberry and Mallette Mothman sighting. Author Jeff Wamsley and Charles Humfree were the ones who decided what text should be on the statue. They paraphrased the introduction of Jeff's 2002 book "Mothman: The Facts Behind The Legend" into a short description that sums up the beginnings of the Mothman legacy.

The inscription is titled "Legend of the Mothman". It reads:

The Mothman Statue was unveiled in 2003 at the 2nd annual Mothman Festival. Fans of the creature all journey to the location of the statue to get their souvenir photos taken with it. The statue gets most attention during the yearly Mothman festival . There is even a 24 hour live feed called the "MothCam" which is pointed at the statue at all times.

Bob Roach later passed away at the age of 81 on August 30th 2015. The Mothman statue may be Bob Roach's most famous work but he also created many other steel artworks of historical figures such as the Chief Cornstalk and General Lewis statues which are located around the town of Point Pleasant. 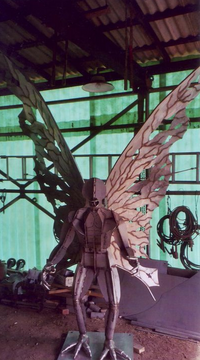 The statue during the building process 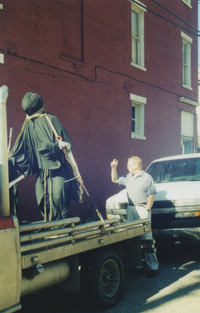 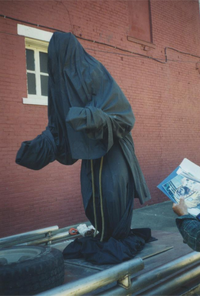 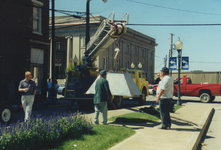 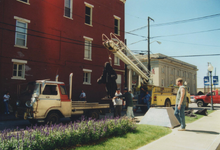 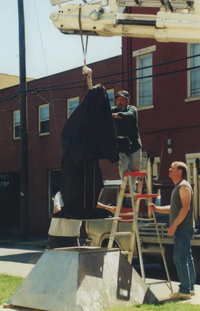 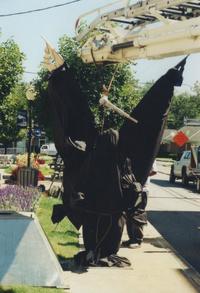 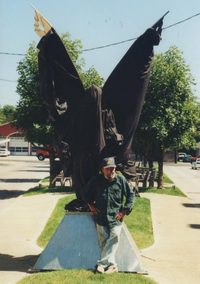 Artist Bob Roach with the statue before unveiling 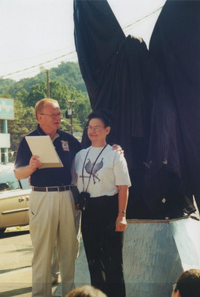 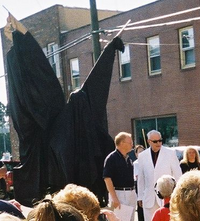 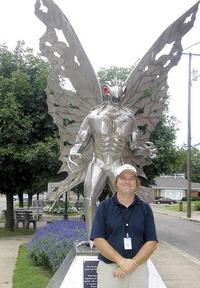 Jeff Wamsley with the statue 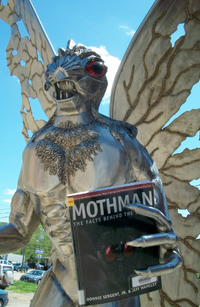 The Mothman Statue holding Jeff Wamsley's book
Add a photo to this gallery
Retrieved from "https://themothman.fandom.com/wiki/Bob_Roach%27s_Mothman_Statue?oldid=5560"
Community content is available under CC-BY-SA unless otherwise noted.